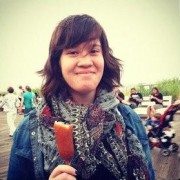 There’s an avalanche barreling towards us.

It started on the mountaintop. It’s too late now to escape. We stand at the window, hand in hand, unmoving. Words rise up in our throats and die before they pass our lips. Instead, we focus on the warmth passing between us and nothing else.

Unhindered, I think of the gas station sushi I ate for dinner last night. Sucks that the last thing I’ll ever eat is shitty spicy tuna three-hundred miles from the closest shore.

I wonder if there are avalanches in Syria. I wonder if anything really matters. I cried when I watched the news last week. Even through the static-humming, pixilated glass of the TV, I saw the anguished faces of strangers and I felt as if their blood was on my own hands. But it feels so far away from me now. Nothing I have ever felt seems real.

You release my hand and lean forward, resting your elbows on the windowpane. All we hear is the distant rumble of tumbling snow, and I have never felt so close to you. I remember the day we first met, when you stumbled into the bar, explained that you had just turned 21, and promptly had an allergic reaction to the peanuts sitting on the counter. I happened to have an EpiPen. So romantic, you had said, laughing.

I wonder if we’ll be buried next to each other, our matching tombstones engraved with our shared last name. They’ll probably never find our bodies. There’s a sound like thunder, and we are awash in darkness as we lose our electricity in the onslaught of the storm. It won’t be long now.

My phone vibrates in my pocket. I look down at the lol? I got in response to the text sent to my brother—avalanche coming. sorry for last month. Love you—informing him of our imminent death. I can’t blame him. I’d like to say there was no time to call, but in truth I just couldn’t bring myself to do it. The membrane of this space in which you and I exist, silent and united, is growing thin. I know that if I were to hear his voice, to confront our reality, it would break.

Our eyes meet and you smile wanly. The snow is rushing forward. It’s almost upon us. Outside, the sky darkens, and the vibrations coming up through the floor rise to a deafening roar.

I imagine that we are in a subway, deep underground, headed somewhere fucking beautiful.

Spencer Shannon is a sophomore at Emerson College pursuing a BFA degree in Writing, Literature, & Publishing, with minors in Psychology and Photography. Her fiction writing has been published in Emerson’s 2012-13 Writer’s Block Anthology, and she has written live music and book reviews for Five Cent Sound and Emertainment Monthly, respectively. She co-manages Under the Covers, Emerson’s sexuality-centric online magazine, and is Head Copy Editor of Concrete Literary Magazine. She has a lot to say about people with dark hair and light eyes.