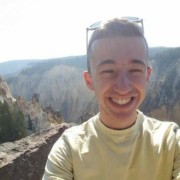 I hadn’t painted in months. “What a shame,” I thought, “to be a modernist in a world already modernized.”

I was evicted from my apartment. I had painted a mural on the wall – I was proud of the piece. It was a Victorian pastiche featuring subtle portraits of political leaders and civil innovators.

“That’ll be two grand, for the damage to the wall,” said the landlord, yellow drool splashing against his sweaty chest. Meanwhile in England, Banksy stencils a rat on a police station and sells it for a million dollars cash.

I moved in with my uncle. He needed care; he was sick with Alzheimer’s.

The home was as bland as the oatmeal he ate every morning. There wasn’t a decoration on the walls, and the carpets were matted down from years of being crushed under my uncle’s wheelchair. He spent his days wilting in front of the home shopping channel, from which he never bought anything.

I thought the change of scenery would help unclog my creativity. For the first few weeks, I tried to paint. The canvas lay miserably blank. Time moved slower there. My blood turned to wet concrete.

One night I woke up to my uncle screaming. “What is it?” I careened downstairs.

“I think I heard a pipe burst in the basement! You’re a plumber, go fix it!”

I obliged out of boredom and respect. The basement was entirely empty. A cursory examination yielded no pipes. I removed a plywood panel from the walls. “This room would be so much nicer,” I decided, “if the beams were exposed.”

I removed another panel, revealing spiders and cobwebs and bucolic colonial architecture. A fog of dust began to fill the cavernous basement. I removed panel after panel.

And there it was.

It was, from up close, an abstract painting in blue and green. Fine, deliberate brush strokes moved with ease across the canvas into gestural swirls, as if the artist had been forging a Pollock. Yet miraculously, it retained its innocence.

I took a step back. It was iridescent in emotion only. It was the bottom of the sea.

I took a step back. It was a portrait of Hamilton.

I took a step back. It was a revelation. There was no signature.

“Did you paint this, Uncle Douglas?”
“I doubt it.”

“How original. How refreshing.”

Ben Sack is a sophomore Writing for Film and Television major at Emerson College. He currently serves as co-president of Kaleidoscope, a workshop for pieces written for children and young adults, and contributes to the Berkeley Beacon and Five Cent Sound. His fiction has been featured in Stork Magazine and Whippersnappers Anthology. He dreams of one day living on a boat and dressing like a sea captain.