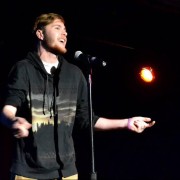 On the 5 train there is a man who gets on
somewhere between Franklin Ave. and Union Square.
Says his day has not been fine,
the way most people riding a train
from Brooklyn into Manhattan’s days
have not been fine.

He tells the weary midnight audience
that his prolonged hospital stays due to his seizures
have left him without work. I bury my face
in my book to avoid making eye contact until
he moves on to other passengers,
limp leg trailing behind him.

I thank my body for doing what it does,
for letting me never have to question
how well it works. That’s how everything works,
though. We don’t notice how fragile things are
until they’re already broken, until we hold
the glass shards
in our bloodied hands.

Kieran Collier represented Emerson College at the College Unions Poetry Slam Invitational 2013 where he was featured in the Semi-Finals Showcase. He is also a curator of the Emerson Poetry Project, Emerson College’s only spoken word organization. His work has been published in The Legendary, Walking Is Still Honest Press, and Emerson College’s Writer’s Block Anthology 2013-14. He is also the assistant poetry editor for and a staff writer at The Catharsis, an online literary magazine. He has strong feelings about the color orange.